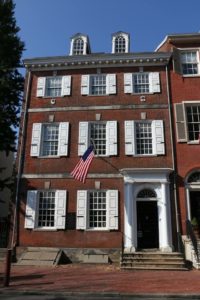 Philadelphia Society for the Preservation of Landmarks/Powel House

The Philadelphia Society for the Preservation of Landmarks is an 88 year old non-profit that is dedicated to maintaining and preserving its four historic house museums: the Powel House, Grumblethorpe Historic House and Garden, Hill-Physick House and Historic Waynesborough.

The Powel House, built in 1765, was home to Samuel Powel who was the last mayor of colonial Philadelphia and first mayor of the city after the revolutionary war and his wife, Elizabeth Powel, confidant of General Washington. [email protected]

Elizabeth Willing Powel didn’t just entertain the political elite with lavish meals; she had a strong voice and became one of Washington’s closest confidants during his presidency, advising him on issues both personal and political. Her husband Samuel, despite his Colonial-revival moniker of “Patriot Mayor,” took a more measured attitude towards Independence, signing the Oath of Allegiance days before the British withdrew their troops from occupied Philadelphia. (The Powels remained at their city residence even while the Earl of Carlisle occupied their bedchamber!) One of the finest examples of Georgian architecture in the United States, it was built in 1765 by merchant and businessman Charles Stedman. It later stood witness as the neighborhood around it deteriorated and industrialized. The property was used for manufacturing and warehousing by owner Wolf Klebanksy at the turn of the 19th C. By 1931, under threat of demolition, the house was purchased and became the flagship property of the Philadelphia Society for the Preservation of Landmarks. Later restored and opened as a museum dedicated to Colonial Revivalism, it played an integral role in the redevelopment of Society Hill into one of the nation’s premier heritage neighborhoods just blocks from Independence Hall.

Famous Visitors during the Powel residency included George & Martha Washington, Benjamin Rush, Benjamin Franklin, the Marquis de Lafayette and John Adams, who wrote of his enjoyment of a “most sinful feast” after a particular visit.

During the early 20th century, Klebansky sold much of the interior architectural detail to the Philadelphia Museum of Art and the Metropolitan Museum of Art. Original architecture elements can be viewed in the Powel Room at both museums.