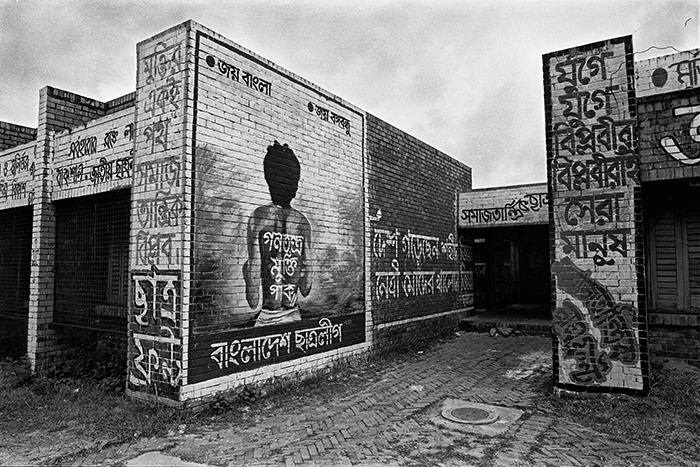 By NARMDirector March 3, 2020 No Comments

“Shahidul Alam: Truth to Power” presents the first comprehensive U.S. museum survey of Shahidul Alam, the renowned Bangladeshi photographer, writer, activist, and institution-builder and a “Time” magazine Person of the Year in 2018. Over 40 images and ephemera show the breadth of his practice and impact throughout his four-decade career. The exhibition includes portraits, landscapes, and scenes of daily life, strife, and resistance in the “majority world”—a phrase Alam has used since the 1990s to reframe the notion of the “third world” or “global south.”

“One of his most renowned works is a picture of a picture — a black-and-white photograph of a mural depicting the activist Noor Hossain, whom the police shot dead in 1987. It’s a work of nested messages: Hossain had the words ‘Let democracy be freed’ painted on to his back, the mural memorialised his martyrdom, and the photo sent words, deed and memory ricocheting around the world.” (Financial Times, Ariella Budick, December 5, 2019. https://www.ft.com/con…/027c8152-15bb-11ea-b869-0971bffac109)

In addition to his powerful photographs, Alam has made an impact in Bangladesh, across South Asia, and even globally as the conceptual architect of transformative institutions, including Drik Picture Library, Drik Gallery, Pathshala South Asia Media Institute, Chobi Mela Photography Festival, and Majority World Photos. Alam’s role as changemaker is one he inhabits with equal resolve and energy. His belief in nurturing visual literacy has driven him to go beyond mere advocacy: Through the institutions he has built, he empowers the disenfranchised and misrepresented to tell their own stories.