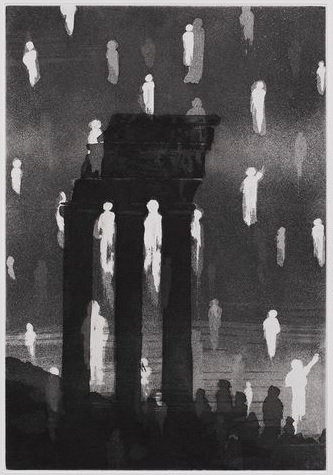 The Inferno of Dante: Etchings by Michael Mazur

“Illustration, like translation, is risky business… At worst, illustrations can sidetrack the reader by introducing ideas or images that change the meaning of the text, skew its tone, diminish its impact. At its best, though, illustration is a reinvention.’’ – Michael Mazur

The Inferno is the first and most familiar of the three sections of The Divine Comedy, a narrative poem written in the early 14th century by the Italian poet Dante Alighieri. The poem recounts a journey that defines the human condition. Told in the first person, it follows Dante and his guide, the Roman poet Virgil, as they travel through Hell, Purgatory, and eventually Paradise.

2021 marks the 700th Anniversary of the death of Dante Alighieri. To mark this occasion, the Museum presents “The Inferno of Dante: Etchings by Michael Mazur.” This exhibit, pulled from the Museum’s permanent collection, presents Mazur’s full portfolio of 41 etchings illustrating The Inferno, the first and most familiar of three sections of The Divine Comedy, written by Dante in the 14th century.