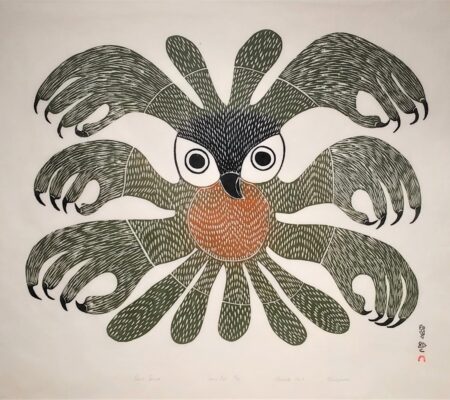 The Shadow Land: Cape Dorset Prints From the Bacardi Collection

“There is no one Inuit word for art. We say it is to transfer something from the real to the unreal.” – Kenojuak Ashevak

Cape Dorset, Nunavut, in the Arctic territories of Canada, is considered the epicenter of printmaking and contemporary Inuit art. Focusing on stone cut prints from the 1960s, this exhibition presents artworks produced by the first generation of full-time Inuit artists based at the settlement, including works by Kenojuak Ashevak (1927-2013) and Pitseolak Ashoona (1904-1983), two of Canada’s most esteemed graphic artists. Created by a relief print cut from stone, it is an art form unique to the Inuit that pays respect to their long history of stone carving.