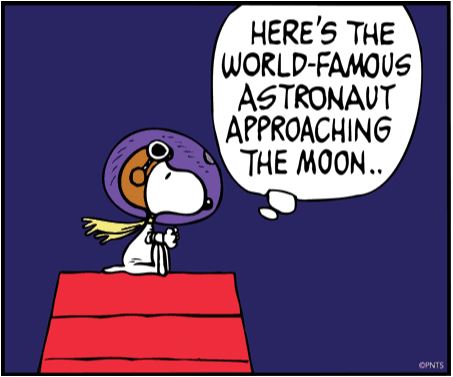 To the Moon: Snoopy Soars with NASA

Just before the first man landed on the moon, Charlie Brown and Snoopy soared through space with NASA’s Apollo 10 mission in May 1969. The exhibition “To the Moon: Snoopy Soars with NASA” examines the history of Apollo 10 and the Peanuts characters’ role in that flight and in the NASA Manned Flight Awareness safety program.

Charles Schulz’s involvement with NASA began a year earlier than the 1969 flight of Apollo 10 when he was approached by NASA with a request to use Snoopy as their safety mascot. The Silver Snoopy Award program was instituted to improve the safety record of NASA employees and contractors. It proved to be a huge success with the astronauts and the employees. The Silver Snoopy pin is a much coveted award. Snoopy has been on the job for 50 plus years and continues to this day in his role as NASA’s safety mascot.

In “To the Moon: Snoopy Soars with NASA,” visitors will see Snoopy’s trip to the moon in the March 1969 Peanuts strip series (besting NASA’s record by a few months!) and learn about NASA’s Silver Snoopy Award program.