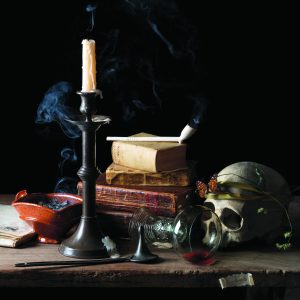 The Muskegon Museum of Art presents “Undying Traditions: Memento Mori” this fall, bringing together work by artists from across the United States currently exploring themes of death and earthly pleasure. The exhibition includes paintings, photography, and sculpture.

Memento mori (which translates to “remember death”) is a Medieval Latin Christian philosophy that encourages reflection on mortality, on the inevitability of death, and the transience of mortal pleasures and accomplishments. The memento mori is typically expressed through the still life, incorporating the human skull with various symbols of time and decay. This tradition includes the danse macabre, a skeletal Death dancing away with the rich and poor alike, and the vanitas, a memento mori that depicts objects associated with physical pleasures such as musical instruments and food. In the Christian tradition, memento mori artworks were intended to remind the viewer that their death was assured and their focus should thus be on the spiritual and not the earthly.